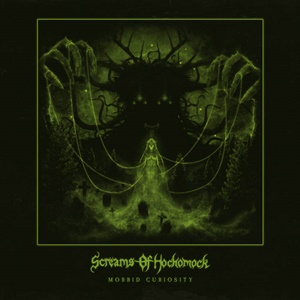 A treasure trove of talent lurks in New England when it comes to all styles of metal. When looking into the melodic death template from the Boston area, it’s time to check out Screams of Hockomock. Active since 2012, they’ve released two demos and an EP prior to this debut full-length Morbid Curiosity. Vocalist/guitarist Pat Dillon is the lone member there since the start, but he’s assembled a killer lineup with bassist Matt Severance, drummer Derrick Manning and keyboardist Charles Woodruff to deliver nine energetic tracks that contain the right balance of extremity and enduring melodic passages to keep listeners satisfied and returning for repeated sonic bliss and aural tenacity.

The unison syncopation finger gymnastics of Dillon/Woodruff on songs like “Under Somber White Skies Part 1” and “Speaking with Ghosts” convey that classic early Children of Bodom excitement – although the guitar play has an extra progressive meets old school metal edge at times to separate them from the pack. When the band choose to hit more of a streamlined riff angle, catchier hooks appear as in the tradeoffs for keyboards and guitars within “Moonstrider”, Pat exuding confidence in his rhythms and slight Iron Maiden-esque harmony accents against a bevy of Scandinavian style melodic death trademarks (think 90’s Dark Tranquillity or In Flames). Often the band put the focus on a strong opening sequence for their songwriting, naturally building things out with heavier, circular motions and then taking things in faster or mid-tempo directions depending on the atmosphere and attitude they wish to convey. Favorites change by the day – the quieter, moodier to galloping sequences for “Through Pain” as well as the triumphant anthem-oriented melodic death closer “Downfall” send blood pumping to all extremities and get those devil horn salutes high to the sky. Pat as a vocalist keeps that sandpaper sharp texture to his growls and screams – nothing too over the top and still understandable for his personal fiction/horror-filled tales to enjoy along with the music.

Add in the right mixing/mastering final touch from seasoned producer Fredrik Nordström and chilling Cryptworm artwork and you have the makings of a band firing at the top of their game. Screams of Hockomock have established a solid, tidy album that should find favor with the melodic death crowd who came to know and love their neoclassical and traditional edges.