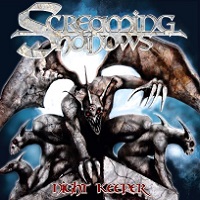 Strange to see a guitar

virtuoso take a backset in his own band. As history has shown us, these type of gents will find every reason to meander off into a pointless guitar pyro section, oftentimes forsaking the bare elements of songwriting. Names like Onward, Holy Hell, and anything remotely involving Yngwie come to mind, but Italy’s Screaming Shadows manage to escape this fate, as main dude/shredder Francesco Marras stuffs his ego in a box, thus allowing Night Keeper (the band’s fourth album) to take flight.

As a whole, Screaming Shadows plays to the traditional power metal angle very well, incorporating tried-and-true elements like double-bass gunning, soaring vocals, and fluid melodies. It’s a time-honored formula in this realm, something a great deal

of bands somehow find a way to screw up, yet SS keeps the song in mind, and in turn, gives birth to a handful of worthy, hummable power metal jams.

Singer Gianluigi Girardi is nice cross between Dickinson and Tobias Sammet, hitting the rafters on “Who Dares Wins,” a meat-and-potatoes jaunt in the heart of melodic metal. Marras gets his rocks off on during the instrumental “Black Rain,” showcasing his nimble fretboard work, as well as on “Wild Horses.” Beyond that, it’s the prevailing Maiden influence (as in, lots of cool harmonies) that gets Night Keeper off the ground, helping it avoid the trappings of most sterile European power metal albums.

The Euro power metal scene in its various peaks and valleys can usually squeak out a good release from time to time, and consider Night Keeper to be one of them. It’s unpretentious, aided by a keen sense of songwriting. Moreover, no one is going to have suffer through dalliances with mindless shred. Yipee!