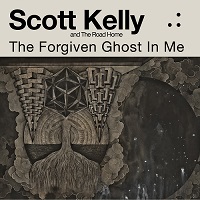 For Scott Kelly the last 30 years (or so) have no doubt been dumbfounding in the sheer gravity of the scope and depth they’ve covered. Neurosis’ early hardcore beginnings and transformation over time into experimental metal’s defining and most astute pillar just being one facet of a career that has seen countless collaborations with other artists and beginning over a decade ago – a very sonically distinct solo career. Thematically in line with the path Neurosis took on A Sun That Never Sets, Kelly’s first solo releaseSpirit Bound Flesh was however, sonically very different, stripped of all frills and acoustically driven. In large part that tradition continued on 2008’s The Wakeand makes up large portions of The Forgiven Ghost In Me.

Sparse acoustic guitar indeed does dominate most of this release, but it isn’t the only thing at play, for The Forgiven Ghost In Me shares many similarities with Blood & Time’s 2004 release At The Foot of the Garden, specifically in how it marries the typically rustic acoustic foundation of his other solo work with the often dark and gorgeous melodic flourishes (…and drums on one song!). Songs “In the Waking Hours” and “The Sun Is Dreaming In The Soul” typify the album in general, with dark and fairly straight-forward acoustic work tempered with Kelly’s subdued and coarse vocal work.

While little here could be misconstrued as being ‘happy,’ things take an almost oppressively bleak turn on tracks “Within It Blood” and “The Field That Surrounds Me.” Each, aside from being the longest pieces on display, are rife with backing instrumentation and atmospheres that suffocate. The latter of the two in particular indicative of a very modern kind of Americana – the post American Dream Americana, one awash in failure and despair. No matter the number of listens it never fails to chill, continuously haunting.

No matter what the stylistic makeup of the project in question, Kelly never fails to impress with what emerges on every release. The Forgiven Ghost In Me is no exception to this, the peculiar opening lines setting the stage for an otherwise draining and soul-baring work. Melancholic to no end and likely indicative of the surrounding world that seems to every turn be hell bent on finding itself lain with ashes, Kelly here provides only more examples of how dark most modern days seem to be. Not for the faint hearted, this is absolutely devastating.