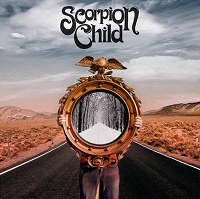 You have to admire Nuclear Blast’s decision to sign Austin, Texas based rockers Scorpion Child. Classic 70’s rock is definitely making a big comeback and a band like this basks solely in the glory of utilizing analog recording technology for their lofty efforts. Better yet, the group evokes early 70’s-era bands like Led Zeppelin, Rainbow and Uriah Heep as inspiration for their hard driven sound, so this should appease fans into the retro 70’s hard rock craze. In fact, their self-titled debut disc goes for the gusto, filtering that twin guitar attack of Chris Cowart and David Finner into a framework for a classic heavy sound.

There are also some strong numbers that showcase the vocal talents of Aryn Jonathan Black, who will no doubt become the rising star of the group with a siren-like voice reminiscent of early Robert Plant. On this disc he’s given the opportunity to front the music, taking the band into many different places throughout the nine tracks, so you won’t be disappointed with the end results. The rebellious flavor of his voice works best on tracks like “The Secret Spot” and “Liquor” and it should bold well for a long lasting career.

Scorpion Child proves their sound can herald back to a time of early 70’s psychedelic rock and then streamline all those influences into a single vision. Certainly with a band as diversified as this, the songs on the debut quickly find their footing and drive hard with much conviction. The song “Salvation Slave” coalesces into a satisfying moment of ultra heaviness and is one such number to display the brilliance of the band’s overall sound.

This is one impressive debut filled with heavy riffs, powerful bass lines and furious drumming, all led by a vocalist who is destined to become a major star. Scorpion Child strives to breathe new life into the lasting legacy of psych rock and there’s nothing stopping them from carving out a musical legacy all their own. This is one band to keep an eye on.