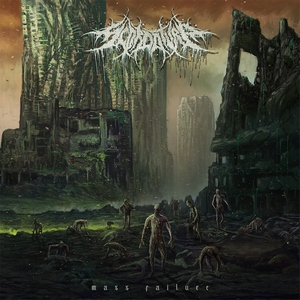 The Scottish brutal death metal squad has been a consistent one. Knowing how to press down on the more aggressive and snarling aspects of the genre without it becoming ludicrous or silly, the band’s previous two full-lengths have established them as a rising force. As album number three, Mass Failure may not reinvent the wheel but show that Scordatura have done a bang-up job polishing it to a pristine surface.

The only thing that really bogs down Mass Failure is its devotion to the death metal texts. Nothing in particular pops out as the band trying much new, but it’s also one of those instances where that sin is forgiven due to how much energy and musical prowess backs it up. Scordatura bring forth a relentless beating across the nine tracks. But that’s not to say it’s entirely one-note. A wide variety of tempo changes, going through the usual high-octane blasts to mid-tempo grooves/stomps to some slower paces, keeps things going forward at all times – as does the hyper-precise 3-4 minute track lengths. Scordatura have really cut off all of the excesses and deliver a meaty dish of death metal. You can more or less randomly pick a track and find some things to enjoy about it, so let’s just take a dive into the title track as one example. It knows how to high the speed hard without it sounding like a jumbled mess or too chaotic, as well as when to ease off the gas a bit and move into some mid-tempo riffs that can work a tad more intricacy into the mix without becoming too ‘techy.’ Not to mention some later groove midway through the track that’s sure to get bodies moving. Round it out by some varied vocal extremity, and it’s a sound mix.

Mass Failure is violent and vitriolic in its nature, and Scordatura show themselves off as scholars within the death metal realm for their dedication to keeping it brutal without diving into boredom. It’s not going to change many folks’ opinion about this type of material, but those who enjoy it are going to savor every second they get with this.