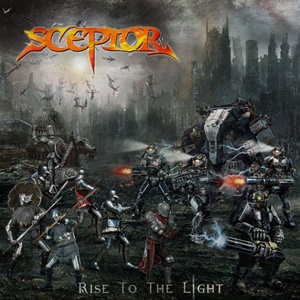 A cross continental band with members from the US and Germany, Sceptor originally developed from 2009 to 2014, releasing a single and debut album Take Command! during that run. Reforming in 2019, they gained a new rhythm section plus a legendary American vocalist with ex-Attacker/Sleepy Hollow singer Bob Mitchell to release the follow up record in Rise to the Light. Expect heavy metal to the bone on these nine tracks, fleshed out with two bonus cuts of re-recordings from the original 2010 single that launched the group.

Twin guitars and clean atmosphere set the tone for the brief “Past Reflections” opening instrumental, guitarists Torsten Lang and Timo Nolden knowledgeable and tactful in anticipation for the future proceedings. The normal tools of fist-waving rhythms, steady grooves with proper double kick/ thunderous fill spots, fluid bass work, and the soaring, resplendent melodies one always cherishes in this throwback style are all there – appearing right out of the gate on “Crown of Nails” much like Iron Maiden, Accept, or Manowar from those early 80’s records. Rich with guitar hooks, harmonies, and cultural textures tailor-made for furious headbanging, it’s easy to get swept into the mid-tempo charge for “Dissension” or the mythological marching “Spartacus”. It’s nice for a change to hear a drum kit with more of a natural sound all across the board – as Flo Bodenheimer wields the sticks and fleet feet through a variety of anthems, executing all the right transitions and fills steady as a rock. Bob chooses to use more of his cleaner register for most of the record, although brings some of his Udo Dirkschneider and David Wayne-like grit during the darker ballad “Armour Black”. Sceptor balance out the old school influences with a bit of modern edge to the guitar/bass tones – probably allowing a broader spectrum of listeners to appreciate the output beyond the older brigade that normal champions this style.

Sceptor is another quintet that isn’t going to rewrite the history books because of Rise to the Light. They just want to remind listeners that traditional heavy metal won’t fade into oblivion thanks to this material.