Scent of Death – Of Martyr’s Agony and Hate (Bloody Productions) 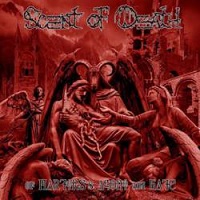 Death metal bands are often afforded the luxury of being able to roll their influences into one mass of undetectable brutality. To a point, no one is going to sit here and nitpick a band if they fancy the same rhythmic patterns of Suffocation, or similar snare-blasting ala Cannibal Corpse. It all meets in the same place, most of the time. For Mexico’s Scent of Death, they have managed to properly hide their prominent influences on their sophomore Of Martyr’s Agony and Hate, while sounding like most, if not all death metal bands that have come down the pike. And to think, death metal is not a confusing entity…

In lieu of what we just noted above about the band having too many influences, Severe Torture is probably the first band to come to mind, and it’s not just because they employ similar album artwork. Like Severe Torture (who could not be more unmemorable), Scent of Death allow their songs to get held up at the intersection of brutality and technicality. Regardless of which way you turn, you’re going to find hum-drum death metal with plenty of musicianship, but not much in the way of dynamics, save for the pacing of “The Enemy of My Enemy” and possibly the elaborate guitar climbs on “Man Kills, God Too.”

Brutality is obviously the ticket on Of Martyr’s Agony and Hate, yet there’s a noticeable discord between songwriting aptitude and the band’s obvious talent. But hey, this thing will steamroll a lot of other albums to come out this year. Just don’t expect to remember any of it.

Scent of Death on on Bandcamp