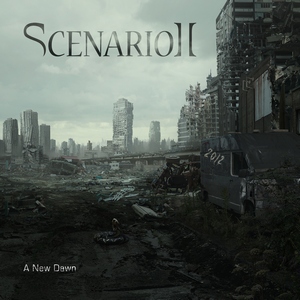 Scenario II’s first album was released back in 2009 (Uniforms of Death) but more recently made its way to Bandcamp, which is what clued in this scribe last year. An older approach to melodic death metal, a la Dark Tranquillity in some regards, but also with some appeal to the symphonic metal crowd. It’s been 8 years since the album’s release and now we have the appropriately titled A New Dawn, as almost all the members have changed except guitarist Mark van Doren and female vocalist Myrthe van Beest.

A New Dawn takes the melodic death/thrash that many have come to know and love, but the symphonic elements give it some fresh perspective. The melodies and harmonies regularly displayed by van Doren and Simone van Straten (also of Sisters of Suffocation) have that driving energy that the Gothenburg era was famous for, without the feeling of a cheap rip-off or simple regurgitation (they do go so far as to cover the In Flames classic “Stand Ablaze”). Check out the addictive melodies of a track like “Endgame,” which effectively takes some nods from the thrashier side of the equation while delivering some keys to offset the galloping riffs when needed, as does the clean vocals of van Beest. The symphonic elements are used rather tastefully – helping to accent the tracks instead of take them over. The title track introduces this concept while balancing soaring blast beats, clean vocals, spiraling melodies, lifting synths, and visceral roars while roping them all together. “Rapture” takes a more melancholic tone with the same elements by twisting their presentation into something that’s majestic and emotive along the melodeath framework. Truthfully, it’s tough to pick a track without its standout moments – there may be familiar elements, but the band bends them into something you’ll want to hear repeatedly.

An album that is bound to reap some accolades as word about it continues to spread, it goes without say that A New Dawn should easily satisfy those looking for some melodic death metal with a symphonic twist. A fantastic release to open up 2017 with.