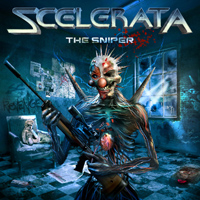 Vocalist Fabio Juan is the new kid on the block, joining Scelerata fulltime in 2010 after the departure of Carl Casagrande. As far as frontmen go, Juan can scream with the best of them and he is virtually a better fit with the band. With that being said, Scelerata are back with The Sniper and this should put them alongside countrymates Angra and Almah for that prime spot among power metal elites in Brazil.

The Sniper is the band’s third release and with Juan strengthening the vocal position, this should raise some eyebrows in Europe. From the top though, the songwriting seems more mature and the melodies are more fetching this time around. Guitarists Renato Osorio and Magnus Wichmann have grown as musicians and the duo work well together on the speedier numbers like “Rising Sun,” “Unmasking Lies” and “Till the Day We Die.” There are sweeping choruses that run through “Welcome Home” and “Breaking the Chains” and the catchiest song on the album is arguably “Road to Death.” The song is filled with influences that range from Metallica, to Angra and to Metal Church.

Going back to the vocal position though, Juan is truly the star of the show. He is engaging as a vocalist and his powerful delivery works well with the tight musicianship displayed here. Fabio’s transition to lead vocalist is definitely helped by guest appearances from Paul Di’anno (ex-Iron Maiden) and Helloween frontman Andi Deris. Di’anno appears on “In My Blood” and Deris co-wrote “Must Be Dreaming” and sang a duet with Juan on that powerful number. Of course Juan needs no help to carry this record given the true breadth of his range, but having the esteemed talents of these musical greats to assist him allows for this record to be even greater.

Some might find this form of power metal a bit stale, given how many great bands already utilize the style, but don’t let that stop you. Scelerata prove that power metal and traditional metal meld well into an existing formula and they are able to churn out strong numbers as a result. Case in point is the nine minute epic “The Sniper” which closes the album to high effect. The title track is complex and it is indeed an opus and maybe the true gem of all the tracks recorded here. Juan expresses himself well here and he is bolstered by a strong mid-section that features a dazzling solo and carried through with an array of symphonic sounds to fill out the body of the number. The heavy riffing at the end of the song truly nails it home for me, though.

The Sniper is highly entertaining as far as power metal releases go. The musicianship is tight and the production is solid from top to bottom. There really isn’t a bad song to be found here and the guest appearances from Di’anno and Deris might be the true icing on the cake. Scelerata are definitely on the rise and this release deserves to be heard, so take heed because the sniper is probably near.