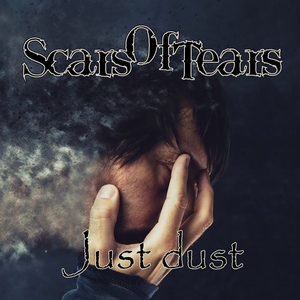 There’s always something to be said for ambition in metal. With many content to simply follow the usual trends or relegate themselves to one style, a more blended approach is always one that easier to get behind. Such describes the advances of Scars of Tears’ sophomore effort, Just Dust, as it tries to marry a number of different modern sources into a cohesive blend – succeeding much more often than not.

So what are we looking at? Well, there’s some modern metal tones, slight industrial and electronic input at times, gothic flair in both the vocals and mood, and some rock mixed into a sleek product. Some tracks lean in one direction more than others, accentuating the heaviness of it all. Opening title track sits at the heavier side of things, with some growls and near melodeath riffing structures before a Leaves’ Eyes gone rock vocals lines up the chorus. Charitini Anastasiadou has a well-suited vocal to the band, blending to the metallic/rock/gothic vibe of the tracks naturally, never going into bombast but a more direct approach (think Lacuna Coil). “Need to Fight” and “Darkest Hour” find themselves hitting a gothic stride, even including some clean, gothic male vocals to add further variety. In fact, these vocals are centerstage in “Love and Soul,” and veer the band into H.I.M. territory. Rockers like “Icefall” offer an immediacy in their catchiness but are well constructed and hold up under repeated listens. While the band sometimes goes too far in one direction (a la “Love and Soul”), the band has the making of a formula down pat.

Overall, an enjoyable release for anyone into something that’s willing to stretch the boundaries a little bit. With some further focus and honing in on their approach, the next release could really hit it out of the park.