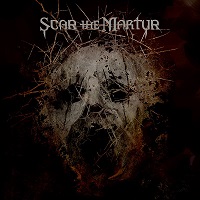 Always a dangerous proposition when a primary member of a bigger band throws themselves at a side-project, for the results are usually all over the map. For Slipknot’s centerpiece drummer Joey Jordison it’s just that, a mostly (…mostly) one man affair on Scar The Martyr, as he recorded the drums, bass, and most of the rhythm guitars himself. Bringing in several others to finish off the leads, keyboard work, and throwing on a mundane mix of radio-friendly vocals on top, the results are decidedly lackluster, though not for reasons you might expect. Bloat is the number one enemy at hand here, most songs running 5-6 minutes and the album as a whole clocking in at a laborious 74 minutes (the special edition running over a full 90).

Long songs alone are not a problem, indeed many bands and whole genres are fueled through the indulgence of often super-long works. The problem here is the same thing that plagued the length Load-era Metallica releases: there simply aren’t enough ideas or variation to justify the run times. One needs look no further than intro single “Blood Host” to see this at play, a slower build up eventually gives way to a formulaic verse-chorus structure that, all things considered, are often hard enough to justify for four minutes, let alone the song’s near seven. This problem rears its head elsewhere: “Dark Ages” and “Prayer for Prey” as examples, but at times it pops up no matter where you stop.

For content, it’s a lot of what you would expect: Slipknot’ish sounding at times, industrial flavors at others, harsh verses and a lot of clean and soaring choruses. Unfortunately while it sounds great on paper, the results are here very mixed and at times almost a chore to listen to when you hear the same chorus for the fourth or fifth time straight. Other than something to appeal to Slipknot fans to hold their attention for awhile till the band releases something new, it’s difficult to picture who exactly this is intended for.