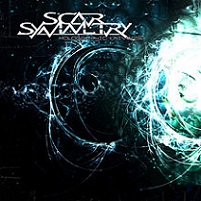 The stage for saccharine melodic death metal was set when In Flames unleashed the unabashedly catchy and fun “Only For the Weak” in 2000. Said song put the bounce and pop into melodic death metal, a framework that Soilwork took and ran with for a short while and Scar Symmetry seems hell-bent on resting their laurels on. While there are a fair share of us who enjoy such cheer inserted into our melo-death, it can be said this is the kind of shit that ultimately sours people on melodic death metal.

Holographic Universe is painfully sweet and joyous, as the band has finally gone too far with those blasted sing-along clean choruses. The shred is (thankfully) still there, but of the album’s 12 songs, there is nary a moment when vocalist Christian Alvestam isn’t crooning at a predictable moment. Across the board,Holographic Universe screams of formula, the over-exertion of the one thing that kept many on the fence about Scar Symmetry.

As for the songs, several songs can be pointed to as the main culprit. “Quantumleaper’s” hard-driving verse is negated by Alvestam’s syrupy chorus, while “The Missing Coordinates” runs into a brick wall after some killer shredding courtesy of Jonas Kjellgren and Per Nillson. Similar problems ensue in “Trapezoid,” “Prism and Gate,” and “The Three Dimensional Shadow.”

”Fear Catalyst” gets the nod as being the album’s real throwaway number, a song that makes an attempt in going from guttural growls to neo-pop metal territory in the chorus. Apparently, there is no end to this – Scar Symmetry demonstrate zero restraint in their chorus choices.

Of the moderately enjoyable, “Timewave Zero” and the pummeling “Artificial Sun Projection” are the only tracks worth giving a passing a nod to, the rest is borderline pop metal drivel ad nausea.

Indeed we are flogging a dead horse with this review – the clean choruses and shredding are the two traits that ultimately define Scar Symmetry. It’d be like not mentioning the acoustic guitars in an Opeth review or the folk elements in a Finntroll review – these intrinsic elements are what define those bands.

They nearly crossed the threshold on 2006’s otherwise solid Pitch Black Progress, but Holographic Universe is hardly the direction melodic death metal should be taking at this point. There is no middle ground here – Scar Symmetry are at the point of no return.