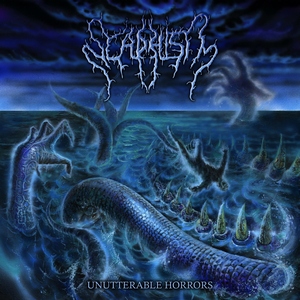 While the old school death metal attack is one that can be looked upon quite favorably, it can also be one that is found to be a bit predictable. Wad up some ‘80s/’90s influences into a ball and fire away. While Scaphism isn’t entirely original in their output, they do blend together some ‘80s thrash to accompany their more ‘90s death metal feel in order to stand out a bit.

Unquestionably old school (even down to the lovingly designed production, which is solid while still keeping its eyes to the past), Scaphism stir up a blistering assault with an 8-song, 28-minute release that doesn’t give you much of a chance to catch your breath. The thrashy influences of the band frequently kick up the tempo into high gear and blast beats, but its blended well with the more death metal oriented mid-tempo churning and groove. Decidedly straight-forward/no frills in nature, what get exactly what you see, but the memorable riffing is what will bring you back to the album as the initial energy boost wears off. “The Feaster from the Stars” and “Mitte eos ad Infernos” both stand out in this regard, with some infectious groove delivering many headbangable moments. The one ‘odd man out’ so to speak is the vocals, which have an almost Randy Blythe-esque delivery to them (with some death metal grit added in), but they do aid in giving the listener some respite from the usual undecipherable growls that tend to accompany this sort of thing, and truth be told they do fit the occasionally groovy music quite nicely.

Vintage death metal that doesn’t stick entirely to the playbill is what Scaphism offer on their second full-length. Unutterable Horrors may not change the game entirely, but there’s clearly been some thought put in by the band to avoid the numerous pitfalls and clichés that many likeminded bands fall into. If you need some old school death metal with a solid helping of thrash, Scaphism have you covered.