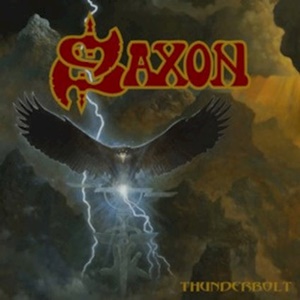 Busy times for traditional metal veterans Saxon indeed. Adept to the changing revenue models of global touring to sustain a living, the band continue to gain relevance for their position in the NWOBHM movement – early classics from albums such as Wheels of Steel, Denim and Leather, Strong Arm of the Law, and Power and the Glory given steady airtime during live sets from headlining tours to higher festival billings. Yet the current catalog possesses potency, keeping up with proper technology enhancement production-wise, as the band see-saw between their melodic heavy metal and classic hard rock songwriting (seek out Unleash the Beast, Metalhead, Sacrifice, and their last album Battering Ram for proof of concept). Which brings us to the 22nd studio album Thunderbolt – adding eleven more tracks to their hall of fame worthy numbers in the metal pantheon.

Because Saxon choose to play to their strengths in terms of tighter, focused songwriting that gets to the hooks early and building it out to engage the listener in maximum fist bumping, headbanging pleasures – you’ll hear everything from a slower, more epic-oriented doomier “Nosferatu (The Vampires Waltz)” to the rockin’, up tempo follow up “They Played Rock and Roll” which contains the right bluesy/punk-ish vibe befitting of a proper tribute to the loss of Lemmy and the mighty Motörhead, all the while Biff slowly ascending his vocals higher to the heavens during the closing chorus . Paul Quinn and Doug Scarratt probably don’t get just credit for the dual guitar employment they deserve, filling the landscape with tact and grace, harmonizing in tasteful manners during “Predator” while also offering up melodic point/counterpart aspects for the verses. There are many spots where the band use their own back catalog as reference points for culturally-driven material – “Sons of Odin” in particular containing vestiges of “Crusader” in terms of the lurking march tempo from bassist Nibbs Carter and drummer Nigel Glockler plus Biff proving even in his late 60’s he can rear back for a ‘Valhalla’ piercing noteworthy performance.

Adding Andy Sneap to the production table plus Paul Raymond Gregory continuing his preeminence at the cover art role, Thunderbolt proves Saxon haven’t lost their ability to churn out anthems that metal legions favor. Do not sleep on this catalog, as they aren’t a mere nostalgia act – like Accept, they’ve created consistency in playing to their strengths and executing to keep up with acts half their age (or younger). Hopefully the upcoming North American tour with Judas Priest to support this record keeps that relevance train rolling in their favor.