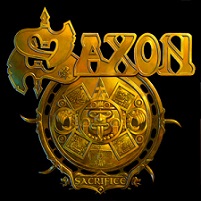 Biff and the boys are no dummies – they know what works, perhaps moreso than any old geezer band going right now. This run of glory (surprised the band hasn’t used that tag…Run of Glory sounds totally like a Saxon album) started in the mid-00’s, where upon their NWOBM brains appeared smart to just about everyone within an earshot. Their career was elongated, critical praise was heaped upon them, and the formula was recognized. With Sacrifice, it’s the variation of this theme, but a damn good one at that.

The PR-supplied quote had the Brits talking about how they referenced their early 80’s glory days for Sacrifice and yeah, one could see the call-and-response of the title track, along with the freewheel burnin’ vibe of “Warriors on the Road” holding serve against Maiden and Angel Witch. Today, it sounds awfully vibrant and vital though; those steely riffs and Byford’s leathery voice still at the epicenter of the machine. Sure, there’s the occasional unexpected/totally expected moment in form of “Made in Belfast” (love the intro) or the AC/DC spit shine of “Standing in a Queue,” but it’s not like Saxon have to stretch their wings in order to prove themselves.

It’s good and just that Byford has been preaching heavy metal as a religion…dude rightfully belongs at the pulpit along with his mates. Sacrifice is another testament to good old fashioned heavy  metal; too unhip to really care, but awfully important  nonetheless. Saxon is a treasure.