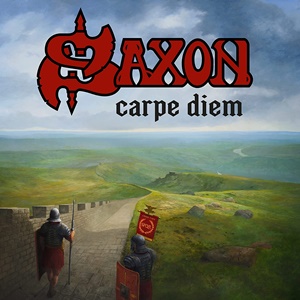 Considering the two significant life events swirling about while Saxon recorded their 23rd studio album, it’s not ironic that they chose Carpe Diem (Latin for ‘seize the day’) as the title to capture this set of material. Vocalist Biff Byford survived a heart attack in 2019, then before we know it in 2020 COVID-19 shut down the live concert industry of which these gentlemen have made a staple since the late 70’s. Always creating in the face of adversity, the band would record in Germany and the UK with Andy Sneap co-producing, mixing and mastering the ten tracks. And for those who love traditional metal full of hefty riffs, powerful melodies, and careful focus on the minor details that make for return engagement in fulfillment, these lads bring the best they can execute, all guns blazing, out of your speakers.

Developing an array of fast-paced, mid-tempo, and moody arrangements has been a staple of the style for Saxon since the early days – and continues forward here through the “Crusader”-like ambiance for “The Pilgrimage” or the steady mid-tempo warrior mentality penetrating “Remember the Fallen”. The tandem rhythms and thoughtful lead break support Paul Quinn and Doug Scarratt slash and dash as masters of their domain, pumping up the adrenaline during “Super Nova” while reaching back to some raw, early NWOBHM momentum with cultural twin guitar harmonies in the instrumental break for “Living on the Limit”. Snappy double kick tricks and proper groove-oriented fill accents prove Nigel Glocker’s professionalism in key signature moments for “Dambusters” – knowing when to push the momentum or lay back and let others take the lead, always serving best the needs of the track on hand. When you think of what Biff has gone through, and still elevates his game to that quintessential vocal prominence that all traditional metal bands need at 71(!), it’s proof positive that the band will not rest on their laurels mailing it in for musical value through these latest recordings. Check out his upper register notes during “All for One” or the personal charm on full display for “Carpe Diem (Seize the Day)” and bang your head ‘til your last given breath.

We know the older generation treasure the late 70’s to mid-80’s catalog the most – but there are plenty of worthwhile records from Unleash the Beast to Lionheart, Sacrifice to Thunderbolt of the 90’s, 2000’s and last decade to process and appreciate by Saxon. Add Carpe Diem to that treasure trove – legends that will not die, nor should they.