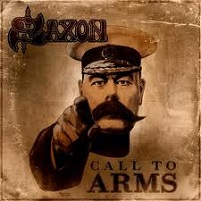 Like clockwork, here comes another Saxon album. They’re not that much different than Motorhead in this approach, being that both bands

are of practically the same age, have iconic frontmen, are from Britain, etc., etc., but Saxon has the edge. Call To Arms (the band’s whopping 19th studio album) is as effortless of a classic metal album as we’re going to hear all year.

There’s no fighting what Saxon is going to do; they’re going to hit you with a handful of mid-tempo rockers, some of which sound like AC/DC (see “Chasing the Bullet”), some that are steeped in melody (“Call to Arms” and the excellent “When Doomsday Comes”) and the rest are simply well-executed metal songs.Singer

Biff Byford still has his wits about him (not to mention his voice), so it’s no surprise that the thundering “Afterburner” is guided by his vocals and not the other way around. The man is a marvel at 60.

Additional highlights include “Back in ’79,” an obvious nod to the band’s early days, “Surviving Against the Odds,” which cues some prime 80’s radio rock, and the Thin Lizzy-boogie of “Ballad of the Working Man.”

Byford and the boys have settled comfortably into their role as bastions of the post-NWOBHM era and if you really break it down, they’re probably the most successful band not named Iron Maiden to come from that glorious time. Call To Arms is a real joy to listen to, and it’s not because of the nostalgic factor or because Saxon is old enough to be a lot of our grandparents. This thing rocks, plain and simple.