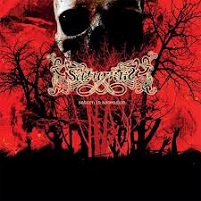 This site has a massive archival file, and it should – it’s been around since 1998. So when the time comes to review a band that has been out of the loop for an extended period of time (i.e. Denmark’s Saturnus), it never hurts to bop on over to the ‘ole search function on our Reviews page to read what Blistering wrote the last go-round. Digging up Saturnus’s 2006 effortVeronika Decides to Die proved to be a worthy endeavor because yours truly hoped aloud the follow-up to Veronika would come before 2012. As it would go, it has taken six years, so our little peering into the crystal ball proved for once, to be prophetic. Rare, these moments are.

The pace in which Saturnus releases albums is null and void, though, having long established themselves on the second tier of European doom metal. Basically, the Danes light the same candles and mope down the same roads as My Dying Bride and Swallow the Sun, which is perhaps the best descriptor; a My Dying Bride/Swallow the Sun bastard child. They’re prone to desperate and mournful-sounding compositions, ones that sometimes take about 85 winter solstices to develop (see: “Wind Torn”), while laying on some slow-churned gurgled vocals and melodies that are slow as molasses.

Saturn in Ascension does manage to pique one’s casual doom-torn interest, most notably on “Mourning Sun,” a dire opus, harnessing the spew of vocalist/founding member Thomas Akim Jensen. Jensen does enjoy the occasional serve-and-volley with clean

vocals, and they’re what aid in the development of “Forest of Insomnia,” a song we initially had confused with Katatonia’s “Tomb of Insomnia from the mighty Dance of December Souls. Funny, it would be a reach for Saturnus to poach a few ideas off said Katatonia debut.

The songs may long and occasionally laborious, but Saturnus piles on the quality ideas with a sense of appreciation for the venerable European doom metal sound. An album as straightforward as Saturn in Ascension shouldn’t be this robust and charming, yet it is, which will make the next album in 2018 worth the wait.