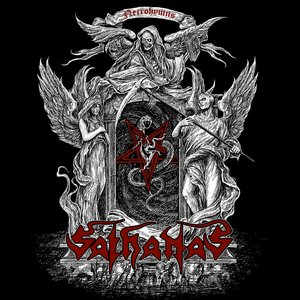 The fact that Pennsylvania’s Sathanas has been rocking their brand of blackened thrash since their formation in 1988 (30 years!) and this is their 10th album should tell you something about them. This is clearly a band that has continued to push their way forward, and do what they want to do in an uncompromising way even if it has kept them under the radar. For this scribe (as well as others), Necrohymns is the first release that sees them generating some exposure.

Clearly rooted in the sound that started them, with blackened thrashy material being the key to their formula, Sathanas wield some death metal to their spirit in a way that sounds dated but not clichéd. One can instantly think back to other bands of this ilk in the late ‘80s, which sported some NWOBHM-inspired melodies into their thrashy attack, but the meloblack tremolo riffs of bands like Dissection also manage to rear their heads once in a while (“Raise the Flag of Hell”). The guitarwork is convincing enough, having that genuine sense as the band has had decades to design the formula that works best for them. But that’s also the unfortunate part. There’s really nothing on Necrohymns that really stands out too much. It feels more or less stock for this type of thing. The passion is clearly there behind the music, but it’s stuck behind riff walls of samey-sounding formulas and legions of bands that have previously utilized it. In the end, one is left with the feeling of it being good at what it was, but never feeling particularly creative.

Necrohymns isn’t going to smash anyone’s worldview, nor should it have to. Sathanas have been around the block (several times perhaps) and they know what they want to play, as well as their intended audience. To that measure, Necrohymns hits exactly the marks that it aims to, with precision. But if you fall outside of that zone, it’s merely passable black/thrash that feels pretty familiar in tone.