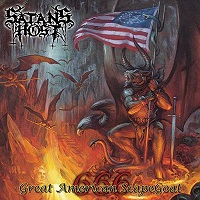 Formed in the late 70’s, well before a lot of us were even a twinkle in our parents eyes (at least in yours truly’s case…), Denver’s Satan’s Host have gone from a hard-nosed, melodic ‘power’ metal band to a threatening, devious death/black combo that is hard to top. Buoyed by the success of the reissue of 2004’s Burning the Born Again, Satan’s Host are enjoying a monstrous resurgence and Great American Scapegoat 666 should only further that cause.

Characterized by churning, evil riffage, SH’s modus operandi centers around praise for ‘ole Scratch. While their message is overt (check their Myspace), SH does it in a classy manner, recalling the prototypical black metal band, Mercyful Fate.

As for Great American Scapegoat 666, there are a handful of downright dastardly tunes here, namely the savage “Dragons – Darkness,” brooding, almost modern Slayer-edged “Azreal – Death Wing Angel,” and the ode “Hail Satan,” something that wouldn’t be out of reach for the likes of God Dehtroned and even latter-day Dissection.

There’s not a whole lot to dislike about Satan’s Host, the band’s versatility has been quite evident the last few years, making future releases worth chartering. One could clamor for some melodic riffage, which is something that band should explore down the road, as the pairing of this particular album’s ‘brutile’ approach and some melodic flourishes could work wonders. Nevertheless, Great American Scapegoat 666 is a pure, hate-mongering blackened death metal platter, that hits the crown of thorns right off of JC’s head.