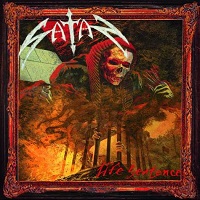 This apparently “go-time” for any NWOBHM to release an album after years of dormancy. It’s akin to a zombie uprising, we guess. Like, what’s more hip than zombies right now? And what’s more fashionable than a rapidly graying British heavy metal band reforming to put an album out? Very few things. It’s not like Satan cares (or has a clue)…Life Sentence just so happens to come out 30 years after the band’s lone celebrated album, Court in the Act.

Considering that only a small percentage of folks have had previous consumption of Satan’s music, the band at least has the intelligence to kickstart Life Sentence with some up-tempo songs worthy of proto-thrash billing. Vocalist Brian Ross has something left in his lugs, as evidenced by his hooting and hollering on “Twenty Five Twenty Five,” which is perhaps the album’s most muscular track. The punchy “Siege Mentality” is right up the Euro alley backdoor, as is “Testimony,” where upon racing twin guitar harmonies clash in a sort of hyper UFO way.

Life Sentence will either surprise many, or entice no one. We’re getting too far into the NWOBM reunion era to justify another band coming out of the woodwork, but hey, if an influential band like Satan wants to give it another go, by all means. They’re not hurting anyone. Well, maybe their backs, but that’s about it.