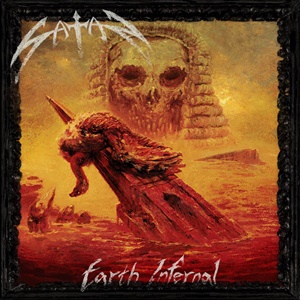 Grabbing a second chance at glory, Satan continues to up their game on record and live, proving they are mighty at their craft when it comes to heads down heavy metal. The sixth album Earth Infernal sees the classic Court in the Act lineup still going strong – a rarity in a genre where priorities shift, interest wanes, and many leave the fold. There’s something special when taking in master musicians who have been playing in this style since the late 70’s, as you know the grit, passion, and commitment cannot be questioned. Living and breathing the blue collar, denim and leather aspects to the hilt – this material once again channeling the primitive spirit of the cause.

The sinister, playful riffing and lead runs that can double up for chilling, dynamic results make Steve Ramsey and Russ Tippins stellar axe compatriots – the work of “Burning Portrait” and “From Second Sight” thrusting and driving to bring the masses to heightened, peak energy levels. Often stripping down the drum groove Sean Taylor delivers proves that basic hits with slightly thunderous fills pay big dividends – as the bluesy power driven “Poison Elegy” illustrates, going from a steady mid-tempo base to semi-doom shifts effortlessly. When it comes to distinctive voices out of the UK, there’s nothing left to chance in the spine-tingling layers present from Brian Ross – right away for “Ascendancy” you can hear the versatility in note choices, emotion, and proper inflection that represents urgency, faith, and belief to match the Satan musical cause. Injecting a solemn acoustic guitar intro before chugging along with electric spider web riffs, gallops, and more twin harmonies, “Mercury’s Shadow” is a fine under three-minute instrumental that could be the modern-day equivalent to “Transylvania” from Maiden’s self-titled debut.

The ’live’, on the floor production differs from the sterile, digital-driven affairs we hear on most modern metal records – another separator for the greatness of Earth Infernal. Older metalheads already know this is a must buy – hopefully the younger generation understands the importance of Satan to keeping heavy metal as a genre alive and shimmering.