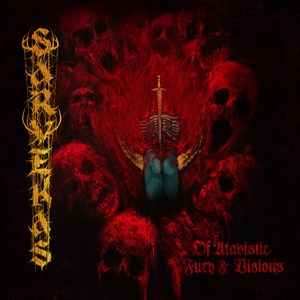 Tis the season at this point, that season being the cold harsh land of winter. What better to celebrate than with some fitting black metal? Sarvekas are a new 2-man act from Finland, and Of Atavistic Fury & Visions is the band’s first EP. Let the buzzsaw tremolo picking commence!

There’s an air of familiarity to Sarvekas from the get-go that should be addressed at the start, but it’s in no means meant to pull the band back. It’s obvious that the band has made a careful study of similar black metal acts that practice the cold, frozen arts and have taken elements from them. Now, this isn’t a simple rip & tear sort of release, caked in blastbeats and tremolo from beginning to end. Hence the reason why it’s a solid pick up for genre fans. They get all of the black metal elements right, even if the familiarity exists. There’s a lot of dynamics to the whole thing. They dive into melodic aspects without it leaning in a too-Swedish direction, instead giving the songs a more royal and grand feel to them (particularly “Surtr’s Breath”) while keeping the freezing aesthetic alive and well. Some dark and eerie moods permeate the atmosphere when they slow down as well, such as “Where No Man Has Trodden,” which really helps in making sure the tracks move forward and keep the interest level high. And of course, what would and EP like this be without plenty of fast-paced, frozen riffs, with the band is happy to introduce themselves with on the opener “Dark Spiritual Devotion.”

Of Atavistic Fury & Visions is an enjoyable introduction to Sarvekas’ icy blackened sound. As they continue onward as a band and develop more of their own style they should prove to be a worthy addition to a more true black metal sound – one that isn’t content to simply beating the listener over the head with blastbeats galore.