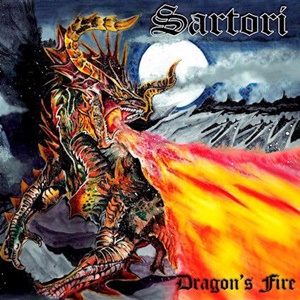 Led by guitar maestro Andy Sartori, we have a band under his namesake launching from a neoclassical power metal platform for this debut album Dragon’s Fire. Andy has international seasoning, born in Brazil with Italian roots, living in many parts of the world including England while now residing in the United States – harnessing a lineup with American and European musicians to flesh out these nine compositions. While not necessarily the hottest commodity in terms of style, there’s no denying the quality musicianship and performances on hand – so expect high caliber vocal melodies, talented musicianship, and plenty of flashy instrumental breaks that provide intricate appreciation for the genre at hand.

The power riffs along with complementary rhythm section propulsion allow the ears to perk up and hair follicles to stand attention taking in the immediate Shrapnel Records roster meets Yngwie Malmsteen/Chastain-like runs throughout “Evil Heart” and “Devil in Disguise”. No one will deny the supreme upper echelon vocal range of Scott Board. It’s right in the sweet spot of Tony Moore, Jeff Scott Soto, and early Geoff Tate that keeps the mid-tempo marching “One Distant Heart” or mystical “Battle in the Distant Lands” soaring, listeners taking in the positive, uplifting lyrical content of being a good human being with movie/story enhancements held in the palm of proper pitch control. Beyond the vocal-led offerings you get “Castle of Lost Souls”, a 4:18 instrumental where bassist Rod Viquez goes toe to toe with Andy in terms of showcasing his neoclassical flair and progressive runs, while drummer Dino Castano rises to the versatile tempo transitions with appropriate grace and energy. Considering the shred-oriented picking, runs, and technical prowess, Dragon’s Fire clocks in at a very economical thirty-minutes and change playback, sure to not overwhelm the listener.

The bare-bones production values could have used a little more polish to these ears – but the performances and songwriting still hold water for those who love this subgenre of metal. Sartori possesses potential and could be a quartet to watch grow on future releases.