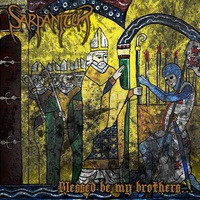 Being first exposed to Sarpanitum through their killer 2011 EP Fidelium (which came via a posting from The Black Dahlia Murder, who frequently show support to more underground bands), it was a very pleasant surprise to see Blessed Be My Brothers in my inbox. Sarpanitum plays a blend of extreme metal that is likely to melt faces, and if the cover doesn’t hint far enough at it, Blessed Be My Brothers is written about religious warfare, an elegant and intriguing approach to a usually clichéd topic.

To play the name game to start, you’ll hear bits and pieces of bands like Morbid Angel, Anata, Gorguts, early Nile, and Mithras (whose Leon Macey tracked the album and acts as drummer here) in their version of blackened death metal. But to just compare band names doesn’t give the full spectrum of Sarpanitum’s flair for the cinematic and atmospheric. The band utilizes significantly large portion of esoteric melodies that weave their way through the songs and almost give the feeling that you are being swept away to some foreign world, but the machine-gun riffing and frenzied drums will pull you back to reality before you can linger too far (in a good way of course). Some of the most impressive riffing occurs on the album highlight “Glorification Upon the Powdered Bones of the Sundered Dead,” which seemingly meshes the band’s potential for energized, bone crushing riffs with eerie melodies and enhancing, yet not obstructive, keyboards. What’s more is that the use of an instrumental opener that actually works and enhances the album, with “Komeno” really setting the stage for the music to come.

If you are in the mood for some death metal most glorious, Sarpanitum will catch your ear with Blessed Be My Brothers. Never leaning too far towards technicality and blending just the right amount of melodies to keep your attention and able to pummel you at a moment’s notice, there’s a delicate balance Sarpanitum has mastered. As a massive step up in terms of songwriting and production from the already stellar Fidelium, this is sure to increase their stock amongst extreme metal fans.