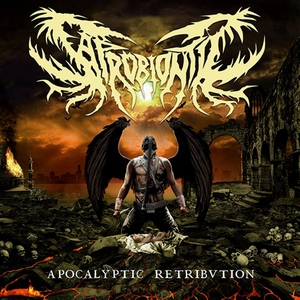 With an EP and full-length behind them (2017’s Science of War), German brutal death metal crew Saprobiontic are back for another round with Apocalyptic Retribution. If bulldozing, steamrolling riffing is what you desire, with a feeling harkening back towards the late ‘90s, you’ll find something to dig into here, even if it slightly wears thin on its welcome by the end.

Warlike and never at a loss for energy, Apocalyptic Retribution is perpetually firing on all cylinders. The music is moving forward, mostly at faster tempos but some switch ups into slower and groovier territory (“Eschaton”) are the norm (for both band and genre). Bludgeoning mid-tempo is where the most destructive vibes are at, and the band attempts to bring these pieces into the tracks as needed (see “Nemesis of the World”). It’s caustic and driving, and that intensity being both a blessing and a curse. With an album that’s incredibly aggressive like this one is, the length becomes a bit of a downer. 44-minutes total starts to make this feel rather repetitive once you get to the album’s latter half – a familiar problem for the genre, and it brings down an otherwise enjoyable release due to the repetitive format of trying to stay as brutal as possible. As the usual impression goes, listening to a few songs gives that bludgeoning feeling, but listening to the whole thing makes the release feel more unremarkable.

Nothing wrong with Apocalyptic Retribution when taken in small doses. While the books haven’t been rewritten or anything, there’s plenty of brutality to sink your teeth into. Perhaps a bit too much given its runtime, but you could do far worse than this one with its feral intensity.