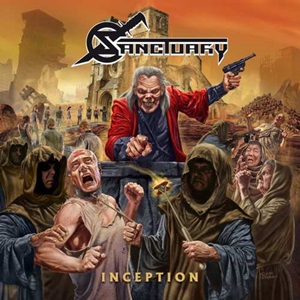 Much like the Star Wars saga where the beginning occurs later in the release cycle, Washington power metal act Sanctuary release a compilation of their pre-Refuge Denied album demos decades after their creation with Inception. Guitarist Lenny Rutledge discovered these tapes in an old barn waterlogged, and through the wonder of technology and Zeuss’ mastering, mixing, and restoration magic we gain the benefit of taking in two studio sessions from March-July of 1986, including two previously unreleased songs beyond seven early tracks that would make the debut record. Understand going in that this is not a re-recorded effort and most ardent fans of these battle angels will treasure the formative ideas present.

The basic production values are noticeable right away – many who may have been put off by the reverb-oriented antics Dave Mustaine favored for the debut record will dig the naturalness to this overall presentation. Bassist Jim Sheppard certainly benefits in robust measures during the classic “Battle Angels”, the slightly slower tempo still very militant in its forward march, while Warrel Dane soars to the eagle falsetto heavens. The two unreleased songs “Dream of the Incubus” and “I Am Insane” easily could have made the Refuge Denied record – the latter containing a lot of driving Randy Rhoads meets Queensrÿche-style riffing, engaging progressive tempos, and Warrel ruminating in multi-octave lower to upper register terrain, while the former has that mid-tempo charge to gain fist banging approval. Becoming one of the first power metal bands of the 80’s to gain a major label deal with Epic along with Riot, it’s obvious Sanctuary has the right heaviness, solid tempos, impressive musicianship/virtuoso moments (check out the lead break for “Die for My Sins”) beyond the potent vocals that could shatter glass in Halford-esque tradition.

Nostalgia runs rampant as newer fans clamor to gain a foothold on what’s happened historically within the metal spectrum. Inception as such is a welcome piece as we patiently wait for a fourth full-length from Sanctuary.