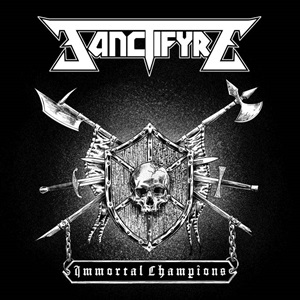 The Pacific Northwest contains a swirl of younger heavy metal musicians ready to put that territory back on the map – remember the first go around with Queensrÿche, Metal Church, Sanctuary and the like? Eugene, Oregon is home base for Sanctifyre, active for a scant three years and issuing Wasteland Warriors as a demo in 2015 plus gaining wider underground acceptance through their Masters of Metal Volume 3 split appearance on Divebomb Records. Striking the steel again, Immortal Champions is a six-song EP that channels the relentless, unyielding youthful enthusiasm and go for broke speed/power attitude to make the genre memorable and classic once again.

What’s immediately apparent are the shredding skills and axe acrobatics from Noah Hadnutt and Nikki Krimson – as they channel lightning fast runs and drop on a dime transitions plus twin harmonic spots for “Skull Shattering Steel” to make you dive back into your Agent Steel and early Helloween records. The stop/start action for the follow-up “Hero of Time” properly brings fists to the sky, the melodic aspects and steady, pounding drums perfect for any Iron Maiden or 80’s Manowar fan. Lead vocalist Wyatt Lightning takes control through his upper register note propensities – not as falsetto as say Zack from Skull Fist, but precise and killer almost in a John Cyriss/ Agent Steel mode. The open road lyrical content for instance on “Warrior Spirit” matches the mid-tempo anthem music to a tee, as you imagine the synchronized headbanging fueled from stage to audience and back again. Even the production values for Immortal Champions speak to an in your face, minimal studio effects output – gracefully handled in house by bassist Matthew Edwards.

The lead work captivates in a way that may be more European finesse meets Shrapnel oriented- check out “The Colossus Falls” and the title cut to understand that even in their twenties Noah and Nikki are putting their stamp on future guitarists to learn from and emulate. Sanctifyre are hungry, and if traditional, power/speed metal gets the blood pumping, this EP is a no-brainer to own, consume, and scream for.