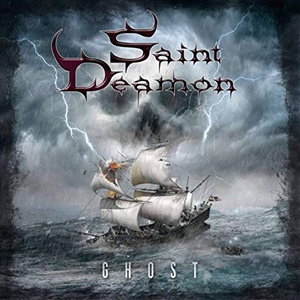 Originating in 2006 with ex-Sinergy drummer Ronny Milianowicz developing this power metal outfit, Saint Deamon has been away from the studio scene for a decade now. Ronny left in 2011, as Jarle Byberg is the latest drummer – but the core members have stayed since the start, including Divided Multitude singer Jan Thore Grefstad. Moving on from Frontiers Records to Ram It Down, Ghost as the third record contains fourteen songs and over 71 minutes of content – showcasing the versatility and maturity of these musicians.

Evident right away is the playful spirit of the group – a folk-like military march and unison whistling that carries the opening sequence of “Captain Saint D” before the jagged power riffs and uplifting melodies from Jan command your attention in a pirate-like, storming the gates arrangement. The speedy licks of Toya along with a double kick feast from Jarle carry “Return of the Deamons” to Euro power glory, a racing energetic number that contains all the requisite gang background vocal support and emotional restraint in spots before the electricity kicks back into high gear a la classic Helloween/Stratovarius. Experimentation occurs on “Hell’s Calling” – the keyboard sequence bringing about classic 70’s Kansas/Styx progressive factors that the musicians feed off of, filtered vocals in spots giving the track an extra dynamic edge but still allowing some eagle soaring falsettos and up-tempo rhythms to enchant. Many of the songs enter the six-minute or more mark due to set-ups and longer instrumental sequences – the ideas thorough and execution proper, even with quick hitting time signature transitions and the softer, acoustic surprise around 3:15-3:55 that make “Land of Gold” a mid-album standout in a Rush meets Iron Maiden-like way. Toya as a guitarist has an arsenal of tones and floats from blues to melodic hard rock, jazz to power/progressive metal atmosphere all dependent on the needs of each song – a true professional that aids the enjoyment front to back of this record. Even a power ballad like “Somewhere Far Beyond” features dramatic swells and guitar tapping that differ from the norm.

While Saint Deamon’s earlier output was tidy in the 38 to 45-minute range, you get the sense that they wanted to reward the faithful with a longer effort to make up for lost time. Normally this scribe would chastise a group for overstaying their welcome and possibly adding filler to compensate, but in this case Ghost serves up enough diversity in styles and tempos/arrangements to justify the cause. Fans of European melodic power metal will continue to treasure Saint Deamon – brilliant vocal melodies, numerous catchy hooks, and good times all around.