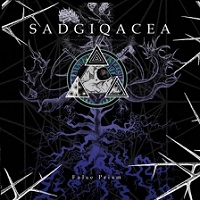 Sadgiqacea is from Philadelphia and their False Prism debut was produced by Woe mainman Chris Grigg. There are four songs totaling roughly 40 minutes. Their name is hard to pronounce and even spell, so Dead Rhetoric will probably copy and paste it from this point on. It has all the trappings of your traditional sludgy/atmospheric crust fare, but is somehow not. Magicians of sound these lads are not, yet, someone must have bestowed grand powers of subtlety on them, for False Prism grows on you like moss.

As indicated in their press release, Sadgiqacea (that is “sad-juh-kay-sha”) run the gamut from Neurosis to Intronaut to Kylesa. Yeah, not a lot of ground covered there, in spite of how much people like to rant and rave about all three. Instead of doing a virtual copy-and-paste from the Neurosis textbook, the band pumps out riffs of equal measure and propulsion. They don’t get bogged down in the distortion mire; rather, they move boulders (or really heavy things), like on “False Segments,” where the dissonance tow starts to take, but atmospheric bits of allure are mixed in. You don’t get it at first – and you probably bristle – but over time, the songs start to take. All four of them.

For a duo, Sadgiqacea covers a lot of sonic territory, and while some of it appears to be on the familiar side, there’s no hiding from the massive title track and closer “True Darkness.” False Prism is a cut above the rest of the current sludge wave, and Sadgiqacea is a band worthy of further investigation. Surprises are great!