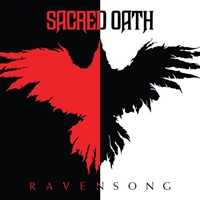 Given a re-boost in 2001 thanks to New Jersey label Sentinel Steel reissuing their debut album A Crystal Vision from 1987, Connecticut’s neck-breaking power metallers Sacred Oath have been moving along with new material at a fairly regular clip. Vocalist/guitarist Rob Thorne and drummer Kenny Evans remain from those early days, as the current lineup contains bassist Brendan Kelleher and second guitarist Bill Smith (who wasn’t even born when the first album hit the streets). Ravensong is their seventh (!) studio full-length, delivering ten tracks that certainly will test the mettle of long-timers as the quartet aren’t afraid to inject a little modern tonality and groove aspects to their familiar old power riff sound.

The first two songs “Death Kills” and first single/video “Taken” aurally possess more of that semi-evil, tuned down guitar aspect that relates with some of the current fascination of djent or staccato driven musicians, while Rob’s vocal delivery is noticeably mid-range and reminds me of Ace Frehley. Bill and Rob inject a lot of harmonic tricks and bluesy lead breaks that make the title track and the Accept-like “Culture of Sin” engaging, sure to get hands hoisted high and hair whipping about as well. As a dynamic diversion, the semi-acoustic to electric ballad “When All Is Said & Done” is a 6:48 stellar performance, something that reaches back into Rob’s early 70’s childhood roots and channels everything from Kiss and Rush to Black Sabbath and Rainbow for a boatload of emotionally driven hooks and poignant lyrics reflecting loss hitting at all visceral angles.

This is not the Sacred Oath of old – Rob keeping his falsetto screams and bird call notes in his back pocket as these songs require more of a modern rock radio-oriented melody scope. As such, a lot of the choruses feel a bit too repetitive and safe considering the vast abilities within the membership (“Death Kills” the easiest offender), but there is an exotic, mystical flavor to “Necrodancer” that gives me hope that Sacred Oath do not feel 100% ready to abandon the ship that put them on the international map in the first place.

You have to admire the tenacity as Sacred Oath enter their twilight years. Ravensong isn’t the worst album gracing my speakers this year – it’s just a little confusing as to what audience they hope to attract, younger or older, modern or old school. 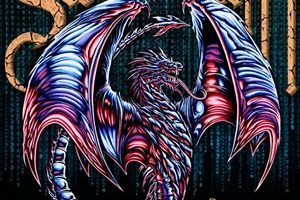 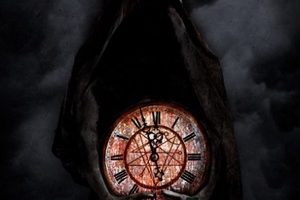