Sabotage – The Order of Genocide (Self-Released) 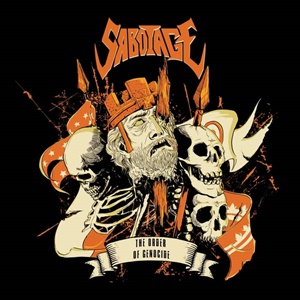 Already making a fervent impression within the Indian metal scene as two-time finalists for the Wacken Metal Battle domestically, Sabotage exude a sharp understanding of thrash throughout this debut EP release The Order of Genocide. Forming in 2017, the quintet appears resolute in developing their take on a host of Bay Area influences – tackling social/political injustice and unrest topics to match up the force and aggression that the music equally portrays.

Proper execution in the transitions creates many memorable moments for Sabotage – the type of riff constructions that hordes of consumers go crazy over. For instance, the final forty seconds of the 3:46 “Failed is The Law” contains this half-time mid-tempo jackhammer guitar/drum combination designed for massive body launching/ wall of death activity, and probably will be a staple for the band in setlists forever. The title track opener contains a tranquil acoustic guitar that segues into a melodic electric part before vocalist Anand Mulgund barks out the title almost as if he’s preparing to launch the song live – the heads down rhythms and slightly melodic twists perfect for those into early Death Angel/ Exodus. His raspy, passionate delivery goes in tandem with the music, careful to enunciate his words on all the right syllables and as clearly as possible – evident on personal favorite “Bloodthirst” which has a bit of classic metal charm against the mid-tempo template, the lead work from Yash Pujari quite emotive. There are times where this scribe wishes the drumming would go a touch more adventurous, as it can be a little too straightforward and monotonous during some of the instrumental sections – but we’ll chalk that up to the newness of the band who are still finding their direction and foothold for songwriting.

Incorporating a narrative news reporter for the closer “Public Enemy” which showcases the band at a more frantic/punk-like pacing in segments, The Order of Genocide tightly delivers Sabotage in a tidy 16-minute framework. Hopefully the band will use this as a stepping-stone to develop their own take on their influences – as there is plenty of promise and potential to harness.