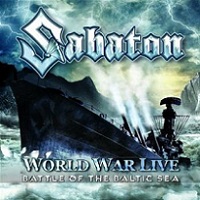 Camouflage pants. Sabaton wears ‘em and wears ‘em well. Being that their profile has shot through the stratosphere in the last 18 months, a lot of people are getting used to seeing the Swedes and their oh-so comfortable choice of pants (Blistering owns a pair or two, by the way). Their 2010 albumCoat of Arms established the band has a force to be reckoned with in Europe, and as a result, the pre-requisite live album in the form of World War Live: Battle of the Baltic Sea was recorded last year…on a cruise ship. That’s quite metal.

The band’s wishy-washy, keyboard-drenched symphonic power metal sound is well-suited for the live arena, as the Swedes are able to maintain their high-octane level of pompousness without losing any of the bite of their studio albums. However, the band’s noticeable flaws (and all-around generic nature) are evident in the live arena. Singer

Joakim Brodén and his uber-thick Swedish accent is barely able to carry the rambling chorus during “Aces In Exile,” while the cheesy “Swedish Pagans” sounds like a Rhapsody throwaway.

What Sabaton does in the studio isn’t all that remarkable, so it’s no wonder a lot of the songs

(15 in all) don’t fly. The band’s more fast-paced songs like “401” and “Attero Dominatus” are probably the best thing they have going for themselves, although it’s hard to reconcile with Brodén’s unimaginative vocal delivery and the deluge of washed-out keyboards.

Still an unknown quantity in the States (Coat of Arms was their first release here anyway), Sabaton has ample time to make inroads outside of Europe. In spite of the band’s all-around “meh” take on symphonic power metal, World War Live: Battle of the Baltic Sea proves that the Swedes are on the brink of becoming a dominant force in European metal. Hope they brought extra camouflage pants on tour.