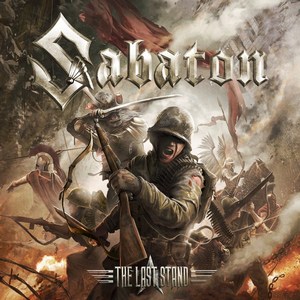 Continuing to hone in on their upbeat (and absurdly catchy) power metal act, the historic storytellers of Sabaton are quickly recognizable as their eighth album hits the speakers. But as one continues to tread a particular pathway in metal and have an identifiable sound, there will always be those who yearn for the band to move forward, stylistically-speaking. Sabaton charge forward with The Last Stand, in familiar blitzkrieg-riddled waters, but that doesn’t lessen its impact.

As per their last album, Heroes, The Last Stand clocks in under 40-minutes, making it a rather digestible listen, and the type you can just hit repeat upon completion. “Sparta” starts things off in the immediately draw-you-in way of past openers like “Night Witches” and “Ghost Division,” setting the stage for the driving riffs and big choruses to come. A few of the other highlights include the synth-driven “Shiroyama,” bagpipe-assisted “Blood of Bannockburn,” and the galloping metallic crunch of “Hill 3234.” It should be noted that the band’s use of synths to enhance their music has always straddled the cheesy/awesome line, and the final track, “The Last Battle” comes off as one of the album’s most memorable (talk about ending on a high note) because of its combination of high-powered synths and one of the album’s strongest choruses. The title track seems to have the vote for the biggest chorus, really focusing on Joakim Brodén’s consistently strong vocals and taking them to another level.

While it doesn’t really cover a lot of new ground, there’s not a Sabaton fan that isn’t going to immensely dig what they hear on The Last Stand. This should be the album that really breaks Sabaton through, in terms of the US market, as it covers all the aspects that they do well at peak performance – catchy yet driving power metal with strong synths (and stronger vocals).