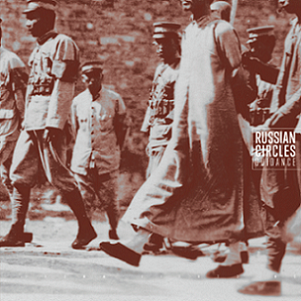 Read some interviews with the fine gents in Russian Circles and it’s obvious they get it. They know they’re not a metal band (try to look ‘em up on Metal Archives—they’re nowhere to be found), hate the “post” terminology, and, approach instrumental music in a manner that makes you appreciate their songcraft. Guidance (the band’s sixth full-length) finds the Chicago three-piece teaming up with noted noise/metal/hardcore producer Kurt Ballou, a man whose sonic expertise is all over a lot of albums these days. But even with Ballou’s production grit, Russian Circles stay in their expansive, whirling lane.

We’ll knock Ballou out first. Russian Circles has always flirted with metal, especially when they decide to line up in one direction, move the samples and/or structure building out of the way, and have at it. What Ballou has simply done is beef up the band’s heartier, or, dare we say, heavier moments, particularly the menacing power dance of “Vorel,” which is as crushing as anything else coming down the pike. Moreover, Ballou’s lively and open production invites even more space into the proceedings, as heard on the excellent “Overboard.”

But like previous Russian Circles forays, the pendulum ultimately swings to the melodic side. The sky-gazing “Afrika,” deceptive “Calla,” and graceful “Lisboa” are each garnished with a melodic angle of their own, the most notable being album closer “Lisboa,” which finds the trio in full lock-stop in half-time, as cymbals crash, soft guitar lines wander on in, and alas, the point is made. Guidance—like the band’s last few LPs—is as heavy as you want it to be, or for our audience, as metal as you want it to be. Doesn’t really matter to Russian Circles; good music is good music.