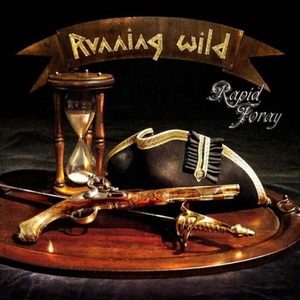 Danger lurks when old school musicians choose to ride on nostalgic waves rather than attempting to dig deeper and put out new records that will retain relevance past six months. Rolf Kasparek remains resolute in his leadership role with Running Wild, as the 16th studio album Rapid Foray builds upon a lot of the band’s traditional throwback power riffs and melodic hooks. Which begs the question – who really wins in the end? We as consumers always hang hopeful that there will be one or two new ‘gems’ that can stack up against the respected and revered classics that the band parades out in larger festival gatherings.

Right away certain guitar licks reach into that cultural/thematic template that these Germans prefer a la Thin Lizzy gone a touch heavier – check out opener “Black Skies, Red Flag” with its twin harmonic action during the instrumental section or “Into the West” for this aspect that has been a potent part of the Running Wild sound for decades. Rolf has a distinct guitar tone, encouraging the denim ‘n’ leather brigade for call to arms action on the faster “Warmongers” or thunderous highlight “Black Bart”. Repetitive simplified choruses increase audience participation for sure, as Rolf’s vocals contain that grit and passion old power metal fans treasure. While most of Rapid Foray clocks in at reasonable four to five-minute arrangements, the band has a penchant for exploring the epic, moody track from time to time- and delivers a winner in the 11:11 closer “Last of the Mohicans”. From the serene intro and Native American-oriented guitar melody on through to the atmospheric chanting and marching middle instrumental strains, it’s a proper clinic in maintaining interest while serving up a riff clinic and an equally engaging storyline.

Small negatives crop up again on the production and programming front (the fans do notice the lack of ‘human’ drumming that makes things rhythmically flat and mechanical at times) – but for my money this record has more value than any in their discography since The Rivalry. As long as Rolf is happy to churn out Running Wild anthems, there will probably be a few followers buying into the pirate/historical themes – so board the ship and cruise along in search of black patch booty.