Runelord – A Message from the Past (Stormspell Records) 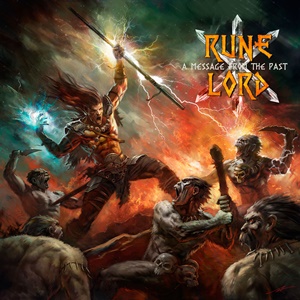 These days, musicians with unlimited creativity can find like-minded people through the internet and execute songs at their convenience. Especially prevalent in the traditional, classic, or epic/power fields are visions of paying homage to specific bands or periods of time – which is the case here for Runelord and A Message from the Past. Written by Fredrik Holm, the ubiquitous Cederick Forsberg (Rocka Rollas, Blazon Stone, and many others) along with The Outer Limits vocalist Georgy Peichev execute this material that contains epic sword & sorcery tales of a bygone period, where Virgin Steele, Manowar, and others in that ilk gained favor in the metal community.

Galloping riffs plus eagle-high melodies and driving tempos make “The Wisdom of Steel” a front half album standout, the transitions galvanizing the troops as they prepare for impending battle while Ced fires away dynamic licks in spots for aural comfort. The Teutonic-edge appears on a faster cut like “Valkyries’ Eternal Winter”, Georgy using a little more of his forceful mid-range while captivating during the sing-a-long chorus as the quieter, effects-laden narrative mid-section builds atmosphere for the electric return. It’s easy to tell what the band is lyrically trying to achieve when you look at song titles like “Valhalla Within” and “Beyond the Epos” – so it shouldn’t be surprising that the music follows suit in that heathen, epic heavy metal vein, but kept in reasonable under four to almost six-minute arrangements. The title cut even brings up visions of early Blind Guardian, the heads down riffing and double kick combinations providing that power surge that brings crowds to their feet – while the closer “Beyond the Epos” twists and turns between almost doom-like bliss and Maiden-esque majesty.

Runelord are probably well aware of the ‘cult’ appeal an album like A Message from the Past has – and that’s okay. Because there are plenty of forty-something and above metal followers who long for these days again and can relive that through this record.