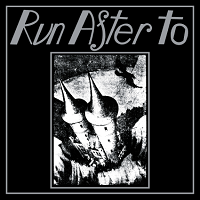 Of the niche labels going at the moment, few have found theirs better than Pittsburgh’s Shadow Kingdom Records, who continue to haul obscure bands from the grave for re-release. The label’s track record trends generally toward the positive side (see the excellent Pagan Altar, Altar of Oblivion, and more recently, Corsair), so the keen eye of label head Tim McGrogen should be trusted, even with an oddly-named Italian combo by the name of Run After To. Up for debate is the band’s 1988 self-titled EP, and their 1985 Gjinn and Djinn demo, both of which accurately capture the soon-to-be-established Euro doom scene.

The band plays doom more on the Candlemass/Solitude Aeternus side than Sabbath, meaning, there’s plenty of symphonic elements to be had across this release, which spans nine songs. The thick, nasally draw of singer Maurizio Cucchiarini may not have the spell-binding cast of Messiah Marcolin or Robert Lowe, but the vamping heard at the tail-end of “My Name is Man” is a worthy moment, as are his inflections on the melody-happy “Melancholy,” which appears twice here. (The EP version is of greater quality, of course.)

And as expected, the demo songs are of minimal sound quality (one has to think fledging Italian metal bands in the mid-80’s didn’t have many resources), so the pendulum generally shifts toward the first three cuts on this release, ones that demonstrate Run After To’s harmonious, eerie brand of melodic doom. So for a band that had a really short run in a climate where sub-genres weren’t defined, Run After To could be considered a foundational item in what is now, doom’s rather monolithic structure.