Ruled By Reason – The Dawning of Dystopia (The Execution Kollective) 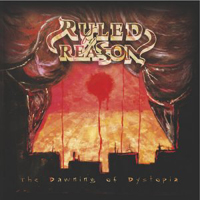 Such an early 90’s Swedish death metal album cover…we were totally duped by Ruled by Reason into thinking this was going to be an Edge of Sanity-meets-Morgana Lefay-type platter. ‘Tis not the case. Metalcore is still ruling the roost for Cleveland’s Ruled by Reason, who on their debut, The Dawning of Dystopia, effectively run the gamut of everything that has been put the tape the last 10 years in the metalcore field.

Naturally, the band has a firm grip on the Swedish death metal sound, swiping and borrowing the usual array of riffs on opener “We Met Destruction” (the gang vocals are cool, though) and on “Within these Memories.” Huge minus points for the inclusion of clean vocals on “Look to the Stars,” which on some level, do allow for a reprieve from Jason Dean’s constant barks, although he is one doing the clean vocals anyway. On the other side of the coin, kudos to the band for having the gall to use guitar leads judiciously and not get carried away with shred gymnastics, a move that would have brought the whole thing down.

A deeper inspection into The Dawning of Dystopia reveals some halfway creative riff and structure ideas (see: the spiraling “The Last Prophecy”), something the band should harbor more on. As it stands now, nothing heard here is going to full anyone, not even the album cover. However, such trickeration worked on Blistering, so who’s to say it can’t work down the road?