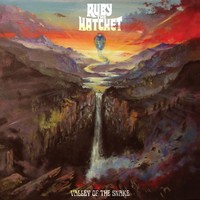 It was relayed to this scribe by an influential figure in the German metal scene (hint: He signed Celtic Frost, Helloween, Kreator, etc.) that Nuclear Blast Records has the market cornered on 70’s-inspired rock and/or metal bands. He’s pretty darn close to being close (see: Blues Pills, Graveyard, Orchid, Scorpion Child, Witchcraft, et al), which gives the ‘ole noggin-a-scratchin’ that Philadelphia’s similarly-styled Ruby the Hatchet didn’t also end up on the NB roster. A&R is a strange beast anyway. But never the matter, for this female-fronted quintet plays, as expected, a right-up-the-alley brand of vintage rock that is either take it or leave it on Valley of the Snake.

From a production standpoint, one just close their eyes and line this sucker up every other record of the current/not-so-current times. It’s draped in those classic, raw tones, that for a stretch, were pretty cool to hear. Now, they’re so commonplace that it runs thin with a band like Ruby the Hatchet, who even with a Hammond organist in their employ, scuttle across this six-song offering. Vocalist Jillian Taylor may have the occasional witchy-woman moment (see her caws on “Tomorrow Never Comes”), but she’s largely unconvincing and may not be totally fitting for some of the band’s heavier compositions.

The retread of ideas across Valley of the Snake (how many times has the opening riff on “Unholy Behemoth” been played by a doom/retro band?) threatens to make Ruby the Hatchet a non-player in the vintage rock scene. Considering the scene is about to reach its overload point, Valley of the Snake feels more like a convenient stab at what’s presently hip, than anything more than at meh-level. 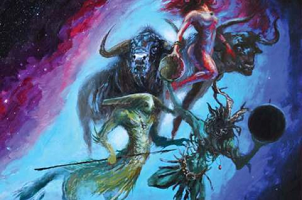