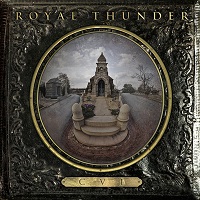 It’s quite wacky to think about how many advancements we’ve made in recording technology, yet some records sound like they were recorded four decades ago. Technology in reverse perhaps? There’s some segments of folk who live and die by this stuff (they’re over 50 or too hip to be friends

with us), while the more technically and Pro Tools-inclined wouldn’t give a band like Royal Thunder the time of day. It reminds Blistering of a former bandmate who refused to listen to anything that didn’t have a good production job. Sorta cancels out quite a bit of stuff, right?

Per the usual, it’s back to the 70’s we go with Atlanta’s Royal Thunder, a four-piece, Zeppelin-inspired rock band who certainly have the retro boogie down-pat on their CVI debut. Fronted by the Joplin-lunged Mlny Parsonz, Royal Thunder take a stroll back on memory lane with an album’s album, if you catch our drift. Sequenced almost to an exact science, CVI has both ample hard rockers and reflective, soul-based rock loungers. Just like they drew it up back in the day.

Initially, Parsonz comes across like a played-out throwback rock siren. You know, the type that supposedly swigs Jack and Coke while playing billiards with the boys, then can get up onstage with her faux Motorhead shirt and rock. Uh, yeah. But Parsonz gets better as the album goes along, hitting the right spots on the shaking “No Good,” and the laid-back “Sleeping Witch.” However, it’s the cult fireside jamming of “South of Somewhere” and the emotive “Minus” where the album really comes to a head.

CVI proudly flies the vintage rock banner with plenty of aplomb and since it’s timed so well (read: no one has quite gotten sick of this stuff yet), methinks it will be a regular critic’s choice for 2012. That being said, Parsonz has a set of lungs worth checking out…regardless if she can (or cannot) be the cliché rocker chick so many will want her to be. And CVI bandies about with plenty of 70’s rock flair and she-devil may care attitude to make it a winner.