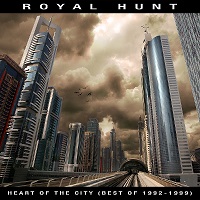 To demonstrate just how small our precious metal scene is, this scribe used to cut checks to recently re-installed Royal Hunt vocalist (and fellow Pittsburgher) DC Cooper. Reason being, my old band was prepping to enter the studio to record an album, one that was supposed (big emphasis on “supposed”) to take us to the next level, so yours truly thought it would be a good idea to send our singer to Mr. Cooper for vocal lessons. For reasons too long to list here, nothing really came out of the sessions, other than our singer being fascinated with Cooper’s various fan paraphernalia, including a handmade doll of Cooper from Japan. That’s roughly $1,000 I never got a return on. Oh well.

To the matter at hand, Cooper re-joined Royal Hunt last year for the release ofShow Me How to Live, which makes sense out of the release of In the Heart of the City (Best of 1992 – 1999). As the title suggests, this is a collection of songs from the band’s glory days, when they were a force on the burgeoning European symphonic metal scene. And one can clearly see why – Royal Hunt were every bit as flashy and flamboyant as Stratovarius, Angra, and Blind Guardian, and with Cooper out front, were developing into an international force.

Going down the line, the compilation has its share of live movers-and-shakers (“Running Wild,” “Making A Mess

”), anthems (“Time,” “Silent Scream”) and momentous fist-bangers (“On the Run”). Cooper is a stellar vocalist, with an array of voices and harmonies at his disposal, most of which lend perfectly to the band’s symphonic power metal angle. Even the 9-minute and change “Fear” is an adventurous sojourn, something that Symphony X wouldn’t be afraid to tackle.

The songs on In the Heart of the City are quite strong, indicative of just how much of a roll Royal Hunt was in the 90’s. Few in North America noticed unfortunately, but like most things, our European friends were ahead of the game, making this a worthy find for those who missed out. Too bad this scribe can’t say the same thing for the money he paid Cooper… 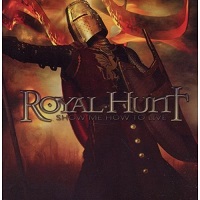