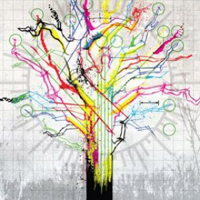 Isis is gone, so someone has to pick up the slack. And while it’s easy to rattle off the usual suspects (Cult of Luna, Mouth of the Architect, etc.) as possible replacements, Rosetta, in their perpetual role as metalgaze darkhorse, seem to be the logical fit at this point. Their 2007 Wake/Lift was just a MASSIVE piece of work that effortlessly married melody with the big ‘ole wall of sound, earning rave reviews (like from us) and in the process, setting themselves up for something on a larger scale. Three years later, A Determinism of Morality is that larger scale. And it’s a big one.

At first glance, the process is still the same for this Philly-based quartet: keep it quiet, move in the soft guitar peddling…then let it explode. Such events thus propel “Je N’en Connais Pas la Fin” to earth-shattering heights, then before you know it, Rosetta backs down and moves the atmospheric “Blue Day For Croatia” in. This commonly-used, but rarely effective dynamic is nearly perfected here to the point where Rosetta has gently carved out its own identity.

“Release” unleashes a spell of winding guitar work, with singer Mike Armine doling out his unearthly bellow, while “Revolve” emerges as the real winner here; the most delicate, soothing number of the bunch, that again, follows in the pattern of capitalizing off ethereal melodies and Armine’s convincing vocals. Closing things out is the title track, a 10-minute jaunt that collapses the whole album into one deadening salvo.

The way we see it, this is now a two horse race between Rosetta and Finland’s Ghost Brigade. Instead of busting out the oft-used Isis tracing paper, both bands have managed to move beyond the atypical bounds of this style and in turn, released their two defining magnum opuses. A Determinism of Morality is nearly a world-beater of an album; the true sign of a band blossoming right in front of us. One of the few utterly recommended albums for the year. Get this.