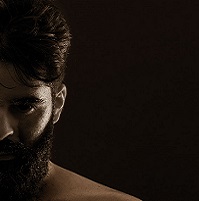 Wait a second…is that some craft beer-loving, pseudo-rugged hipster on the cover of Rorcal’s Creon? The gentleman sure looks like it, eh? This scribe sometimes can’t walk 10 feet in his hometown of Pittsburgh, PA without running right into one of these fellas. But we digress. Rorcal is a Swiss outfit playing a suitably extreme, albeit rote brand of blackened doom, although that’s quite the generous tag. In reality, the band (who have been an active entity since 2006, and have three previous albums to their credit), are thoroughly unappealing.

Vocalist Yonni Chapatte just kills the whole thing. The man suffers from the same malady as other “vocalists” (used in context) of this thread—he never quite knows when to be quiet. Riff after riff, part to next part, whatever, he’s on top of it. It becomes a death-knell right from the jump on opener “Πολυνείκης” and continues for the next three jams, which we should add, are all over ten minutes long. To further cloud matters, Creon is a concept album about four well-known figures from Greek mythology linked to Creon, who is best known as the ruler of Thebes and had four sons and three daughters. (Thanks, Wikipedia.)

Really, the whole album is one big brick wall of sound. The uniformity of Rorcal’s ideas is only matched by their inability to grasp the basic concept of dynamics. It begs the question: why roll out a cool concept only to muddle it and/or ruin it with a never-ending stream of indecipherable vocals, half-baked riffs, and song structures that defy logic? Creon is a real head-scratcher.