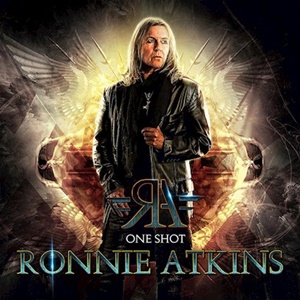 Coming to terms with stage four incurable cancer, Pretty Maids vocalist put his energy into a debut solo album with One Shot. Together with producer/multi-instrumentalist Chris Laney (also in Pretty Maids), the duo set about writing material, assembling the songs in a reverse top-down method (vocals and melodies first, music second) and adding in notable musicians in the melodic hard rock/metal scene from all over Scandinavia. In the end, listeners will treasure these eleven tracks that cover a wide array of styles from melodic hard rock, metal, and feature numerous 80’s references that even capture some AOR textures.

Personal reflections on the reality and mortality of life make tracks like “Real” and the title track poignant, Ronnie reaching into his natural register for some magnificent catchy moments especially in the chorus work. The mid-tempo, Def Leppard-ish feel of “Subjugated” contains some marching strains, as well as an uplifting chorus that has that church/choir-like feel, an early album highlight with some solid bluesy meets sophisticated lead guitar break support in all the key moments. Gaining assistance from many of the musicians associated with the lockdown 2020 movie soundtrack remake viral act At the Movies, musicians such as Speed Strid, Kee Marcello, Pontus Nogren, Olliver Hartmann, and Linnea Vikström Egg to name a few lend support to make the material sharper and larger than life, whether in specific solos or vocal additions. You get driving material in that early Dokken/Whitesnake mold for “Before the Rise of An Empire” and then a reflective, tender ballad with “Miles Away” where the soothing background vocals make you feel like you are taking in a sunset in a calm summer day with the one you love. The songwriting and performances are very sharp and on point – immediately catchy keyboard or guitar hooks, Ronnie dialing in the right phrasing, words, and inflections, building up the songs to memorable traits that easily embed themselves into the brain and body.

We will all mourn the loss of Ronnie – and with One Shot he leaves the musical world with another reminder to squeeze every moment you can out of this life and deliver the best you can while here, as talent like his comes around only so often.