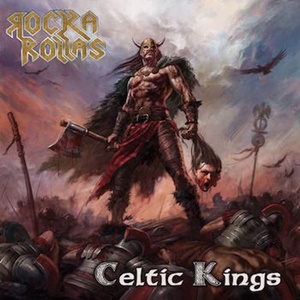 Knowing when your energy has been expended to its fullest extent is rare in the music industry. For vocalist/guitarist Cederick ‘Ced’ Forsberg, he has so many different bands and projects going you’d need a cheat sheet to tackle them all based on Metal Archives listings. Rocka Rollas has been a going concern for a decade – releasing four full-lengths and an EP, but Celtic Kings as the fifth album will in fact be their swan song. The material has been around from 2011-2016, put on ice until Ced could find the right lineup to execute the material. Guitarist Emil Westin-Skogh and bassist/drummer Rolvert Gunnarson round out the recording members, and the listeners can expect another Teutonic-oriented speed/power metal effort that worships at the altar of old Helloween, Blind Guardian, and Accept.

Ced this go around took on the main vocal duties (as he did on 2014’s The Road to Destruction) and his helium-oriented delivery hits that upper Jason McMaster/Alan Tecchio range – wait ‘til you hear some of the eagle-high action on “Last Days of Light” or Blind Guardian-ish opener “The Price of Vengeance” and hear melodies that may shatter glass. Bombastic keyboard orchestration opens “Knights of Valor”, Ced and Emil running off numerous licks and harmony twists against the larger than life choir chorus – a valiant power charge for those seeking inspiration to run into battle. Double bass and spider-web riffing gives the shorter 3:07 “Mountain of the Dead” a bit of that Thundersteel-era Riot flavor, although the chorus is dripping in Accept/Rage texture – the time change maneuver halfway through an aural surprise. The title track is an almost fourteen-minute sprawling epic that features multiple guest vocalists during the verses and a Braveheart/cultural-style framework – almost a tribute of sorts to Helloween, Iron Maiden, or Running Wild. The acoustic moments, driving instrumental sections, and calmer, slow marching elements make this a centerpiece most epic/power metal followers savor – and Ced does not disappoint, pulling out all the stops.

Capturing that 1985-1995 speed/power metal period where German bands ruled the roost, Celtic Kings sense Rocka Rollas off into the sunset proud to keep the legacy of that era alive.