Rivers of Nihil – Where Owls Know My Name (Metal Blade) 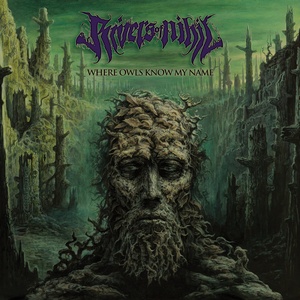 An album that seems to revel exploration not only in the aggressive and pummeling death metal mannerisms of their peers, but also an emotional resonance that’s both melancholic and ethereal, Where Owls Know My Name is a true journey in every sense of the word. There’s a profound increase in progressive influences within the death metal structuring, with the band incorporating everything from saxophone and mellotron to clean vocals to electronic and ambient elements. The obvious centerpiece to this is the 8.5-minute “Subtle Change,” where the band goes completely off the prog deep-end of their sound, while still keeping a sense of who they are. The result toys with both blistering heaviness and introspection – sometimes creating a blend that results in sheer sonic bliss (such as the build-up and unloading of the gorgeous solo around 6:15). In less dramatic doses, the little tweaks here in there like the mellow build-up in the title track, or the jackhammering riffs of “Old Nothing” prove the band fully capable of widening the spectrum of what death metal can be, without an ounce of compromise.

Proggy exploration aside, and as odd enough as it sounds to say, Rivers of Nihil has also designed a death metal album with heart. Not the sappy, soggy kind, but listening to Where Owls Know My Name evokes feelings of self-reflection and sadness, emotions far outside of the usual tones of angry catharsis. “The Silent Life” lays into a stunning saxophone solo early on in the album to prep the listener for what’s to come, with later cuts like “Hollow” and its floaty melodies being more than enough to give fans an ethereal grin. But they save the greatest feat for last, with “Capricorn/Agoratopia” casting some sinister tones that gradually elevate to a breaking point with a huge emotional payoff coming at around the 5:30 marker. It’s the type of thing that can give listeners chills, and rare is the band that can pull it off (especially in the usual colder landscapes of death metal).