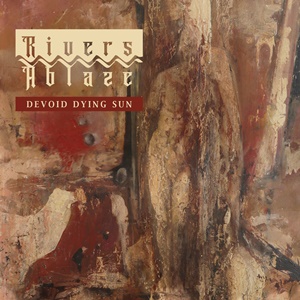 An experimental progressive extreme metal project led by guitarist Márten Kertész, Rivers Ablaze hail from Hungary and in two short years have released two full-lengths – of which Devoid Dying Sun is the latest. Preparing oneself for an aural journey conducted on an instrumental basis can be challenging – especially given the propensity for certain musicians to inject as much technical prowess and diversity over the course of a record. The trio on hand service these six songs with a proper balance between segments of grand flourishes of deep grooves/hooks and then insane progressive interplay of the death, blackened, and progressive/djent veneer.

The keyboard work from Zoltán Cséry for instance has an alluring 70’s/80’s atmosphere – soothing with pitch bending notes during the introductory sequence of “Invocation of the Consuming Fire” before the manic blasting/tremolo-fueled death riffs and jazzy/Voivod-ish parts careen into one another, sometimes going from full force insanity to Gojira-like mid-tempo stomp in a nanosecond. The layers of guitars create this frantic sonic wave of energy that can translate into key circular progressive sequences of shimmering ecstasy – elements of Death, Opeth, Behemoth, Wolfheart, and others springing to the forefront during the back and forth speed to calmer shifts of favorite “The Manifestation of Supreme Darkness” – drummer Olivér Ziskó easily handling the doom to blasting maneuvers necessary. These gentlemen know when to push the extreme nature but also place earworms of an odd variety – be it keyboard splashes or clean, jangly guitar lines to give the listener room to encapsulate and process the music on display. At 45 minutes Devoid Dying Sun isn’t an exhausting experience – timing of the essence, requiring numerous playbacks to capture all the ideas in a firm way, as exotic chord sequences and timing switch-ups go hand in hand with the smaller melodic runs.

Although you would think at surface level Rivers Ablaze appears to have the musician crowd in their sights, the songwriting and performances can be appreciated for progressive, extreme metal followers not necessarily schooled in the art of trained instrumentation. Intriguing and entertaining enough to watch the development of this three-piece as this would be very welcome to take in live.