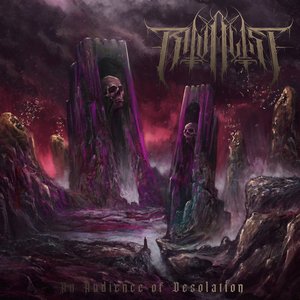 Oftentimes in the world of Bandcamp, for this scribe, it’s a matter of noticing the artwork that ends up being a factor in giving an album a click to listen to it or not. In the case of An Audience of Desolation, the bleak vibes and purple colors really stood out, warranting an investigation. Thus leading to a pleasant deathcore-esque discovery in Ritualist that may not have occurred otherwise.

Being a bit fussy with deathcore releases, finding one that stands out can be tough. Too much of the same sounding stuff occurring, and Ritualist does a good job at trying to do something a little different. The ‘core signs are there, but never become a glaring sticking point, and with the current sound, one could imagine them abandoning many of the tropes as they continue to move into their own sound. They never rely on chugging riffs or breakdowns, but do prove they can master them with a track like “The Lamb,” which has some righteously devastating ones. They also utilize a fair bit of synths in their mix, but keep it purely as an atmosphere booster than something that guides the act, outside of the EPs intro track. The capture that same eeriness that the cover portrays, which is always a plus. Outside of that, some enjoyable solos make their way in for melody’s sake (see “Neural Inferno”), something that adds to the breakdowns ability to be inspiring instead of bland. The riffing can have a somewhat technical slant as well, with “Kana Tevoro” leading the charge here with some spiraling riffs that share time with more melodic chugs and atmospheric notes.

Ritualist’s approach to deathcore works because they keep a more diverse palette than many other newer starting acts. A genuine hint of promise is here as they continue to expand upon their sound and take it into new directions. An Audience of Desolation already grasps how to make the template work, so anything else they bring to the table will likely springboard them further into success.