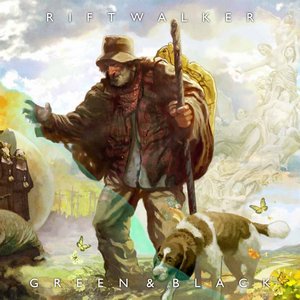 Vancouver-based progressive death metal band Riftwalker know how to stand apart from the crowd. Just one gaze at their starkly bright cover art alone should convince you of that. But cover art alone can only get a band so far, and Green & Black, the band’s first full-length, displays the makings of a band that is going to impress over the long haul.

Green & Black may end up lumped in with the tech death movement by some for some of its intricacies, but there’s far too much going on outside of that to confine it to that sound. Truly a mix of progressive, death, and thrash comes together for Riftwalker to venture in. The bass plays a prominent and bouncy role in the mix, and some of the riffing is dazzling from a technical standpoint (“Intrinsic Degeneration”) but these elements are brought into a thrashy mindset, which pulls out some frantic aggression from time to time. The shred aspect can be strong, but it’s countered by an almost ‘70s progressive rock vibe (check out the groovy and bass-heavy instrumental “Primordial Collapse”) which is really what separates them from your more standard death/thrash act. In these more melodic and progressive pastures, like moments of “States of Decay,” the band shows they can balance a delicate divide between keeping things frenetic and impressing with technical ear-candy.

It’s a tougher niche to appeal to with a focus on turning death thrash into a more melodic and technical beast, Riftwalker prove themselves to be a band to watch with Green & Black. Having only an EP prior to this, it’s a fully realized and fleshed out debut that is sure to send some singing their praises for the balance of tech prowess (particularly the basswork and leads) but reining it in for the sake of the song. Which should result in equal appeal to the progressive and extreme crowds.